ProChannel (Platinum and Professional only) ► Tape Emulator module (Platinum only) 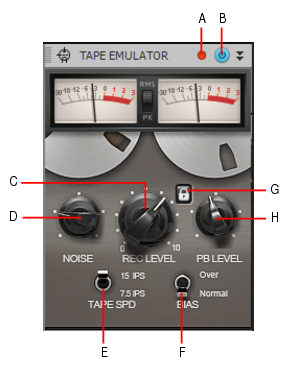 A. Clipping LED B. Tape Emulator enable/disable C. Rec level (input gain) D. Noise (tape hiss) E. Tape speed F. Bias G. Link H. Playback level
The Tape Emulator module emulates the sonic characteristics of analog tape recordings, and provides extensive control with adjustable tape speed, bias and noise parameters.
Digital audio is often accused of lacking “character”. Although mixing entirely inside a computer has many benefits, it can sometimes lack the character of using an analog mixing console and analog magnetic tape.
Digital audio can capture audio levels up to 0 dB before undesirable clipping occurs. This is known as overload. Analog tape recordings also have an upper limit, but unlike digital clipping, the signal compresses and distorts slightly as you approach the limit. There is typically a “sweet spot” of a few decibels before undesirable distortion occurs. Because tape saturation sounds pleasing to most people, recording engineers have long been using it as a creative mixing tool.
The Tape Emulator module lets you add the analog warmth and richness of magnetic tape saturation to your digital mixes. Use it on individual mono or stereo tracks, or on buses.
Unlike real analog tape, the Tape Emulator gives you the flexibility of applying tape saturation to individual tracks, and only where desired. For example, you may want to apply heavy tape saturation to drums, a little less to bass guitar, but not to vocals, etc.
What is tape saturation?
Tape saturation occurs when you try to record too loud and varying signal levels onto magnetic tape for it to accurately reproduce, whereby the input signal is no longer directly proportional to the recorded signal. During playback, the tape reproduces less energy than was originally there, which is the saturation effect. Recording engineers often experience this as a result of trying to record a signal that is loud enough to overcome ever-present tape hiss.
Unlike digital distortion, analog tape saturation can sound pleasing in the right situations, especially on drums.
Tape saturation adds subtle non-linear distortion, compression and EQ, which can add grittiness and bottom end to your tracks. This is often perceived as “punch” and “warmth”.
Controls
The Tape Emulator module contains the following controls:
See:
ProChannel (Platinum and Professional only)
Using ProChannel
ProChannel modules and controls
PC76 U-Type Channel Compressor module (Platinum only)
PC4K S-Type Bus Compressor module (Platinum only)
QuadCurve Equalizer module
Tube Saturation module (Platinum only)
Softube Saturation Knob
FX Chain module
REmatrix Solo convolution reverb
Bark of Dog
Panipulator
GRIT (saturation) module
MAX (volume maximizer) module
SPACE (reverb/ambience) module