With the new Cyclone DXi from Cakewalk, you gain complete control over your loops and .wav files.  With Groove Clip technology SONAR allows you to break up your loops into individual transients for real-time pitch shifting and tempo matching.  Now we've upped the ante once again by allowing you to move, delete, tune, pan, and replace every single slice individually.

Cyclone DXi is available in SONAR 2 and later

Wish you had used a different kick drum? Done!

Wish you hadn't hit that one flat note on your guitar hook?  No problem!

Rather than just overload you with the hype about Cyclone DXi, we'd like to show you some of the more common uses for this exciting new plug-in.

Here you can see the basic layout of Cyclone: 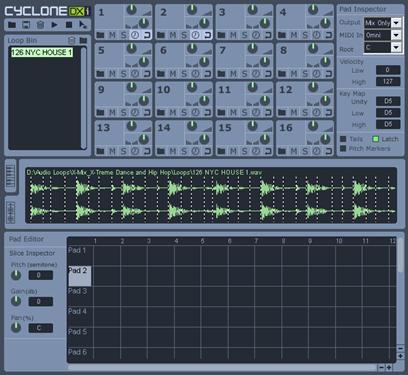 Mapping Out your Grooves

In the example above, we've already loaded in the drum loop "126 NYC House 1" from the SONAR 2.0 CD into our Loop Bin.  If we wanted to trigger this loop live from a keyboard or MIDI track, we simply would drag the loop from the Loop Bin to one of the pads to the right.  However, we're going to focus on some of the more in-depth functions of Cyclone. To begin, simply highlight the clip in the Loop Bin so that the appropriate waveform appears in the middle window.

Let's start by assigning each drum sound to a different pad.  This allows us to write a new variation of the groove with the existing kit, giving you a lot of use out of a single loop without having to continuously dive back into your loop library for every drum break or bridge.

Start by selecting the first 'slice' in the waveform and dragging it down to Pad 1 in the Pad Editor.  For consistency, release the slice over the Pad name (Pad 1, Pad 2, etc).  This ensures that the slice will remain in the same position relative to the other slices, which will be important when we get to our second example.  Since the loop basically repeats itself after 4 bars, we only need to repeat this for the first 16 slices, assigning one slice per pad.  When you're done it should look like this: 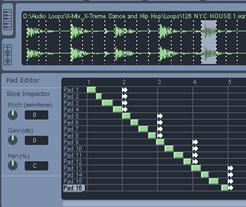 After you've assigned all the pads, you'll want to turn off the Loop button

for each one.  Now in SONAR assign a MIDI track to Cyclone; setting the input to MIDI OMNI and the Output to Cyclone.  If you used the new Synth Rack feature than this should already be done for you.  Play your MIDI controller (or use the Piano Roll View) and you'll find that all of your drum hits have been mapped between C5 and D7.  Go ahead and play around with the hits and see what you can come up with.  You can can try to recreate the existing groove or you can completely rearrange the pattern to make fills, breaks, or totally new patterns.

Here's a tip: You'll probably notice that some pads are more useful to you than others.  Any pads that you aren't using you can empty by simply right-clicking on the pad in top of Cyclone and choosing Clear Pad from the pop-up window.

Recording Your Performance to a MIDI Track

When you are ready you can record your new groove in as MIDI .  Try laying down a simple pattern with the Bass and Snare first using Pads 1 and 5 and then go back and lay a hi-hat pattern on top using Pad 4 and 8.  You can lay down multiple patterns on top of each other by either using Sound on Sound from the Transport > Record Options menu or by setting up a new MIDI track (but don't forget to change its MIDI Out to Cyclone).

Now you may have noticed that in the last example the open hi-hat on Pad 4 was a little quieter than the closed hat on 8.  This is easy to fix and there are two ways to go about it.  First, you can simply change the gain setting

for pad 4 to raise the volume.  Second, you can select the actual slice in the Pad Editor view located on the bottom of the screen.  Immediately to the left you'll see the Slice Inspector which allows you to change the pitch, gain, and panning of the selected transient.  Individual slice editing can be especially useful when you have a whole loop assigned to a pad.  While you're here, try applying some panning to you hi-hats and snare as well to increase the stereo image or adjust the pitch of a slice for a really extreme sound.

Removing and Replacing Parts of a Groove

Now that you've seen how Cyclone can be used as a creative tool for freshening up those old grooves, let's look at how it works as a production tool.  Go ahead and remove the previous loop from Cyclone by selecting the clip name (126 NYC house) and then hitting the delete loop icon

Let's say that you're not entirely happy with some of the existing sounds in the first loop.  Perhaps you have a one-shot sample or another loop that you really like.  Substituting samples is easy.   First, open up the new loop or sample in the Loop Bin, (we used '107 Can I get a Loop 2'), then drag the loop to a new pad (either in the upper or lower window).  Once the loop is assigned to a new pad, you can see how each slice corresponds to the waveform by simply highlighting it.  An important item to note here is that the pad loop point indicated by a small white arrow

This sets the loop point for each pad, so make sure that you align them properly for looping.  Setting the loop point for one pad to the 5th or 9th beat (as opposed to the 16th) can make things easy for you by letting you simply write a 4 measure pattern once instead of copying it four times.

At this point you can start to highlight and delete slices from both loops.  You may choose to layer sounds from each loop or simply substitute one sound for another.   Remember that you can also copy slices by holding down Ctrl when dragging.  The picture below shows what we came up with. 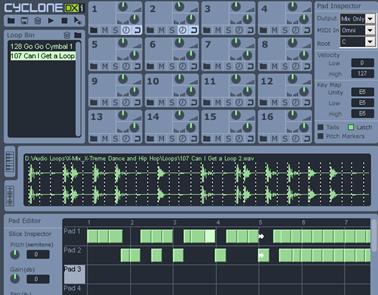 This should give you some insight into the level of control that you have access to in Cyclone DXi, and hopefully we've stimulated your own creative juices for more applications for this plug-in. This is just the beginning of what you can do with Cyclone DXi, so get in there and experiment with things for yourself.