This article was adapted from the SONAR Manchester Update PDF.

The Manchester release provides significant enhancements to the logic for soloing Aux Tracks, as well as tracks that have Patch Points as inputs. Solo functionality is now “Patch Point Aware,” so when you solo an Aux Track or a bus that outputs to a Patch Point, SONAR will automatically manage the solo state for all upstream and downstream tracks/buses. The Solo logic for bus solo has also been enhanced, so that buses are aware of downstream Patch Points to which the buses may route.

The upshot of this intelligent management is that it eliminates the need to solo or mute other tracks manually when using Patch Points, greatly improving the Patch Point workflow.

Furthermore, the Clips pane now confirms Aux Tracks track status visually, so “what you see is what you hear.” All upstream or downstream tracks that mute as the result of soloing an Aux Track will be dimmed in the Clips View to indicate that these tracks will be silent. This makes it very easy to see the results of muting an Aux Track within a project.

The simplest way to illustrate how this works is with a few use cases, but the new Solo logic handles many other general routing scenarios. 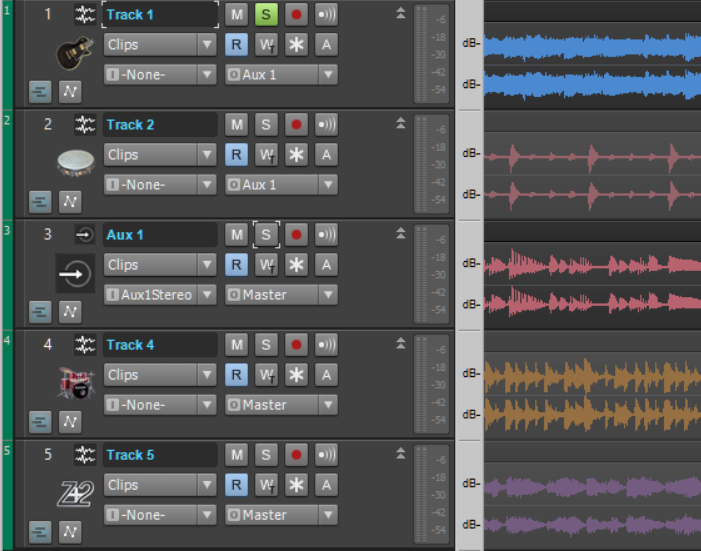 Soloing a track that routes to one or more Patch Points via an output or send (directly or indirectly) will make all downstream patch points in the circuit audible. In this example:

Soloing Track 1 makes Aux 1 audible. Note how tracks 2, 4, and 5 are dimmed to reflect that they’re muted. 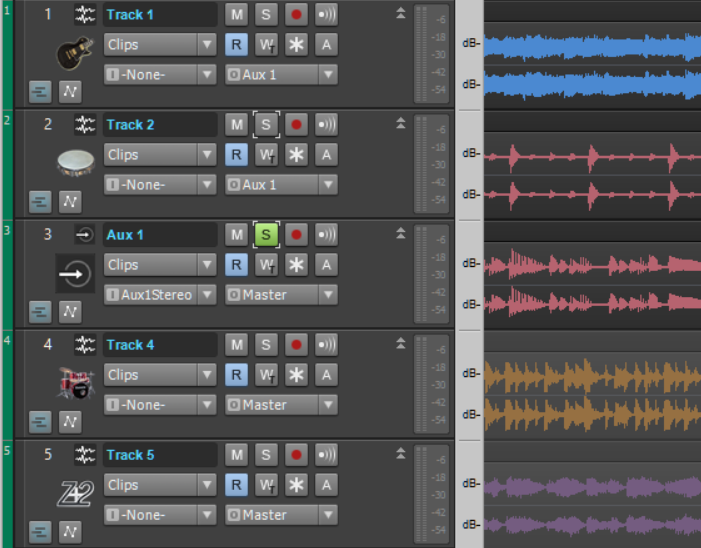 Soloing a track that has its input set to a patch point automatically makes all upstream tracks or buses audible. In this example:

Soloing Aux 1 makes Tracks 1 and 2 audible (you can still solo and mute tracks 1 and track 2 independently). Note that tracks 4 and 5 are dimmed. 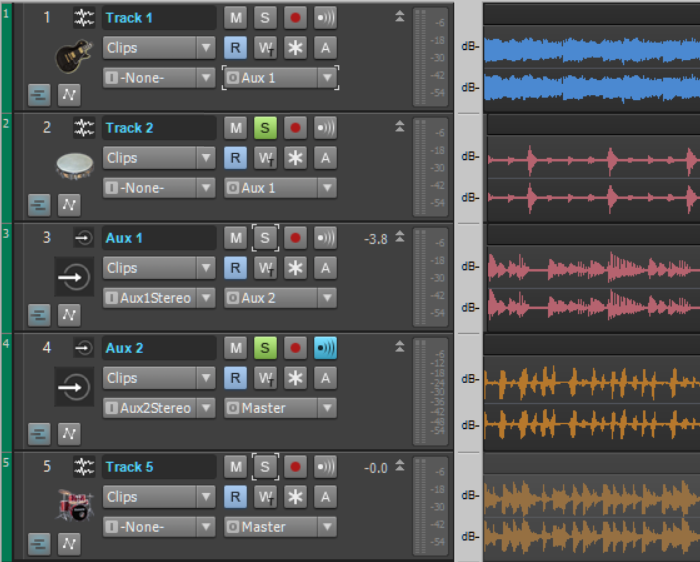 Here’s an example of what happens when you solo tracks chained to multiple patch points and aux tracks. In this example:

Soloing a bus to which an Aux track outputs makes all upstream tracks or buses audible automatically. For example:

Soloing the Master bus will make Track 1, Track 2 and Aux 1 audible (note that you can still solo and mute tracks 1 and track 2 independently in this scenario).

Soloing a bus that routes to one or more patch points via an output or send (directly or indirectly) will make all downstream patch points in the circuit audible. For example:

Soloing Bus A will make Aux 1 as well as Track 1 audible.

Example 1: Simple Instrument tracks that output to patch points or aux tracks are now automatically included in the circuit when you solo the patch point track.

Soloing Aux 1 will automatically include both Simple Instrument Track 1 and MIDI Track 2 in the mix.

Example 2: Multi-out synth tracks that output to Patch Points automatically include all referenced MIDI tracks in the “circuit” when they are soloed.

While working “under the hood” to enhance the Solo function for use with Patch Points and Aux Tracks, the Bakers also streamlined and optimized the track solo logic (however, despite speculations in the SONAR forum it’s not true they changed the oil filter; SONAR does not require an oil filter).

Previously, some computations were being done multiple times to evaluate the solo and exclusive solo state for tracks. Because these computations were being done every time a track’s solo state changed, this would slow down soloing multiple tracks when quick grouping, as well as slow down project loading. With these changes, soloing tracks and loading projects with solos will be faster.

For example, if you have an existing Aux Track named "Aux 1" and import a Track Template that references the same Aux 1, SONAR will automatically assign the imported tracks to the Aux Track "Aux 1" input/output virtual ports.

Note that because SONAR’s import logic automatically checks for and eliminates feedback circuits, inputs will be assigned to None if feedback results from assigning an input to a Patch Point. (This is similar to the way buses are merged when importing a Project Template.)

Thanks to our friends at Celemony, SONAR users who have the bundled version of Melodyne Essential can now upgrade to Melodyne 4 Essential for free. It’s simple: The next time you open Melodyne, you should see an opportunity to upgrade. If not, simply run the Update Check from Melodyne’s preferences. Either way, once you reach Celemony’s servers, the download process is automatic. Unzip the folder, open it, and then double-click on Setup.exe. Follow the authorization procedure, and you’re ready to rock. Well, or at least correct pitches, and do all kinds of other useful things.

Although the interface looks cleaner this is much more than just a UI change. With the older version, you could edit monophonic signals like vocals and bass with the Melodic algorithm as well as non-tonal, percussive material with the Percussive algorithm. The new Universal algorithm in Melodyne 4 allows transposition, conforming to tempo, and quantizing chords and other complex material with very high audio quality. It’s even well-suited to pitch-shifting and time-stretching entire mixes, and CPU consumption remains very reasonable. (However, if you want to change individual notes within a chord, you do need a more advanced version like Melodyne Studio or Melodyne Editor).

What’s more, the variably configurable, single-window interface makes it easier to adapt Melodyne to your own preferences and working requirements, with new browsers and inspectors offering a better overview and direct access to all important parameters. There are also many more keyboard shortcuts for improved efficiency. Furthermore, under-the-hood improvements optimize Melodyne for the latest operating systems in either 32- or 64-bit environments.

There’s a new video on using Melodyne 4 with SONAR; check it out for more information on what this combination can do.

Finally, although this doesn’t apply to Melodyne Essential, note that SONAR supports Melodyne Studio’s new Multitrack mode thanks to SONAR including specific VST3 interfaces that support this behavior. Multiple instances of Melodyne in a single project can now be “aware” of each other, so in SONAR Platinum, you can see all the track names and switch among the ARA multitrack data views in Melodyne's window—very useful for reference purposes when editing your current track.

The Manchester fixes and workflow enhancements are available in their own knowledge base article.