This article was adapted from the SONAR 2016.03 Update PDF.

The SONAR 2016.03 update includes the following: 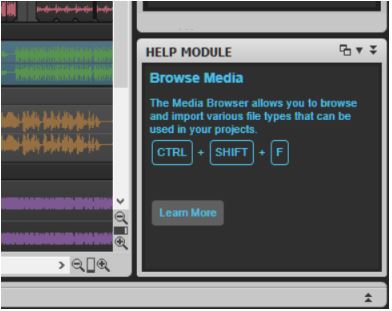 SONAR is a program with a rich feature set, so it’s not always easy to remember all the features, tips, tricks, and shortcuts that speed up workflow and make using SONAR a pleasure. However, help is on the way—literally.

Choosing Views > Help Module (shortcut “Y”) opens a new pane in the Skylight interface’s Browser that you can undock, collapse, and reposition. Also note that because it has hooks into the Windows interface, you can change the Help Module typeface size by hovering the cursor over the Help Module pane, then holding the Ctrl key while using the mouse scroll wheel to change the size. 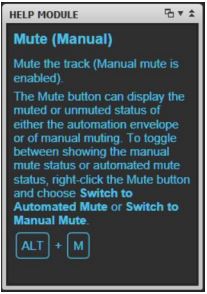 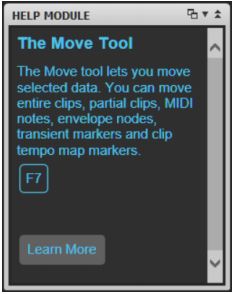 For help on a particular interface element, hover over the element with the Help Module pane open for about a second; text appears in the Help module that describes the feature. If a shortcut is available,you’ll see the key combination and if you see a Learn More button, click on it to link to the online help and other resources.

Not all SONAR elements have become integrated with the Help Module yet, but it will continue to be beefed up in the future so it becomes an ever-more useful resource to SONAR users at all levels of expertise.

Thanks to Melodyne’s Tempo Detection feature, which SONAR accesses through its tight ARA integration, it’s easy to generate a tempo map from a clip with a varying tempo. Whether you’re working with a live recording or a recording done without a click, creating a tempo map is now a simple drag-and-drop operation. Although this feature reaches its full potential with Melodyne Editor and Studio, it’s still extremely effective with Melodyne Essential 2 and 4.

If you’ve already converted the Clip into a Melodyne Region FX, you have another option. Click on the Tempo Options button.

This opens a dialog box with three choices.

To modify the tempo map (note: tempo maps are available only in Melodyne 4 versions higher than Essential) based on the tempo Melodyne detects in the Clip, choose “Use the tempo rid detected by Melodyne.” Also note that with Melodyne Studio, if you edit a tempo inside the tempo editor, you need to close the tempo editor (by clicking on Melodyne Studio’s Tempo Edit button) before you attempt to drag and drop the clip to extract the tempo. Otherwise the edits will not be included in the data that’s extracted.

With Melodyne Essential or higher, you can conform the Clip tempo to the existing Tempo Map. Choose “Use the tempo grid from the DAW.” If you want a constant Clip tempo and conform the Tempo Map to that tempo, choose “Set constant tempo grid,” and then specify a tempo. 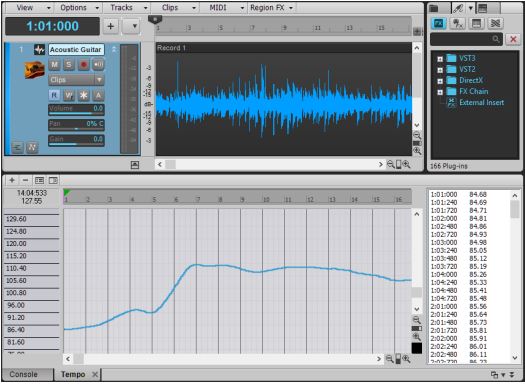 Although Melodyne’s Tempo Detection process is extremely reliable, sometimes it “guesses” a tempo that’s a multiple of the actual tempo. At present, Essential can’t fix this because it doesn’t offer any tempo detection editing; however as noted above, Melodyne Editor and Studio can modify tempo. For additional information, please consult the Melodyne and SONAR help files. 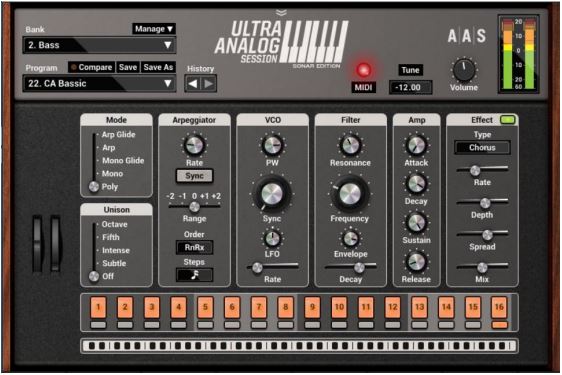 If you think synthesizers should be fast, fun, and funky, this one’s for you. With 144 productionready presets and another 100 signature presets from Richard Devine and Sean Divine, you can just choose a sound and go—but it’s so easy to program you’ll probably find yourself tweaking away. For example, the screen shot shows a cool, “mini”-style bass sound that took all of two minutes to create, without even reading the manual. 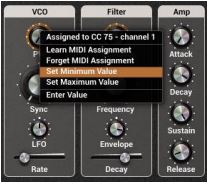 Standout features include a built-in arpeggiator, seven different effects, hard-sync sounds, five unison modes, and five global modes. UAS 2 is very much like a late 70s analog synth from one of that era’s prominent Japanese manufacturers, and it places a premium on real-time control—which is why the MIDI Learn functionality is great. Not only does it do MIDI Learn and MIDI Forget, but you can control any number of parameters with a single control, and specify minimum and maximum values. Choosing a higher minimum than maximum value can reverse a parameter’s response, so a single controller can increase one parameter value while decreasing another one.

Ready to have some fun? Click on the logo to check out the manual, then start playing 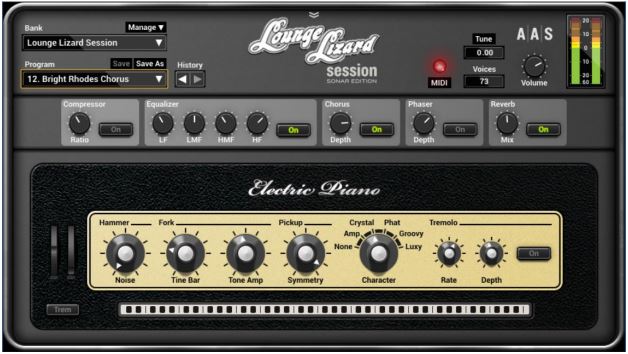 One of the most intriguing updates is the ability to load Scala tunings, which are different from standard equal-tempered or “stretch” tunings for piano. For information and to download Scala-related files, visit the Scala home page. 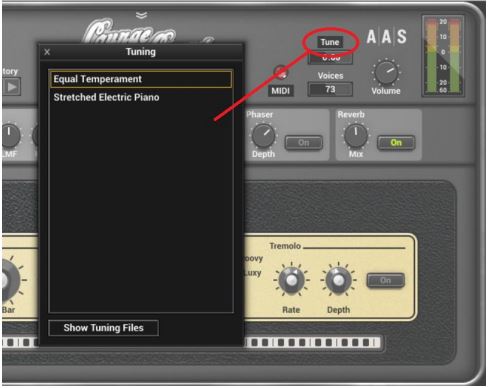 You can add more files to the list by copying them to the folder: %AppData%\Applied Acoustics Systems\Scala Tunings\

Next time you need an electric piano, try Lounge Lizard first—you may never use a sampled version again, especially after these new updates

Multiband processing splits audio into different frequency bands, which you can then process separately. I first used multiband processing in the Quadrafuzz multiband distortion unit, which was published as a DIY project in Guitar Player magazine in 1983, released as a kit by PAiA Electronics, virtualized by Steinberg as a VST plug-in, and released as the QF2 hardware unit by Iron Ether—so this is definitely not a “new” concept.

What is new is that SONAR makes it super-simple to do these and other multiband processing techniques, thanks to Aux Tracks and SONAR’s Universal Routing Technology. Prior to Aux Tracks, you’d need an audio track and a bunch of buses. But now you can do everything required for multiband processing in the Tracks pane, and button it all up in a Track Folder for a compact, practical setup.

As one example of multiband processing, with multiband distortion there’s less intermodulation distortion because each band is distorted separately. So, the resulting sound is more “focused” than conventional distortion. However, you can also do tricks like chorusing different bands individually, using different delay times on higher and lower bands, processing program material in novel ways, and much more.

The 2016.03 releases includes three Track Templates to get you started, but here are the basics on creating your own.

ABOUT THE TRACK TEMPLATES 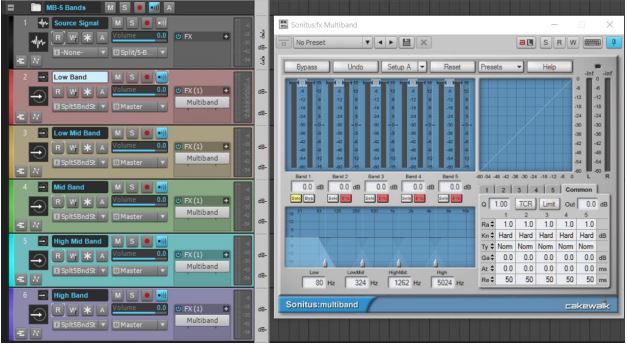 Referring to the Sonitus Multiband effect, because it’s inserted in the Track Template’s Low Band, its lowest band (Band 1) is in Solo mode and the other bands are bypassed. Solo the Multiband’s Band 2 for the Low Mid Band, Band 3 for the Mid Band, Band 4 for the High Mid Band, and Band 5 for the High Band. Now you can insert a processor in the FX Rack after each Multiband so that each track processes its own band. Assign the track outputs to your master bus, a different bus, or another Aux Track, and get creative.

(By the way, there’s reason for the track colors...they follow the color spectrum so it’s easy to see which bands are higher or lower.)

The next screen shot shows the Program Material Track Template. This divides the signal into low, mids, and highs, which can be useful if you want to do something like apply different compressors to each band. Because the band divisions are fairly broad, this works well for program material.

Although the Sonitus Multiband has five bands, you can move the frequency ranges around and solo more than one band at a time. In this example, soloing the two lowest bands covers the Low Band range, the next two bands cover the Mid Band range, and the highest band is soloed to take care of the High Band.

The final screen shot shows the Guitar Distortion Track Template, which takes some creative license compared to the previous multiband distortion techniques (for those who listened to the preview of my new CD “Neo-,” this is the same template used for the final “big” guitar chords in “Maladie Du Coeur” at the end of side one). Note that I’ve turned off solo in the Multiband compressor so you can see all five bands in this one view. 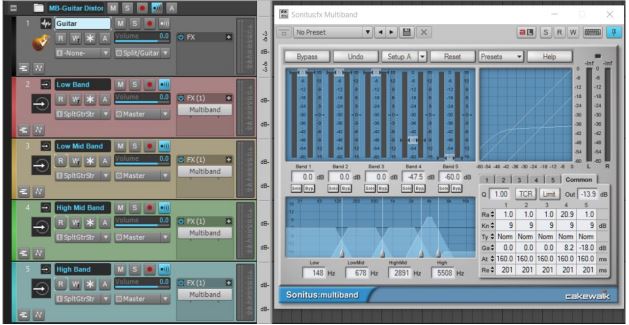 Because each band is intended to feed into distortion, you can optimize the response; for example, the highest band is turned down as far as possible—you don’t want to add massive distortion to high frequencies. As a result, the sound is a little less bright but the fourth band has 5.7 dB more gain than the lower bands, and a substantial amount of compression (after all, this is a multiband compressor!) to make the midrange more responsive and touch-sensitive. It also covers a fairly narrow range, so this effect happens only in the upper midrange.

I trimmed the output levels of all the bands because I was using a high-gain amp sim, and wanted to bring down the “drive” a bit. Normally you’d keep the output fairly high, maybe even higher than normal, because the distortion input is “seeing” less level than it would if it was receiving all the frequencies.

DO THE EFFECTS GO BEFORE OR AFTER THE SONITUS MULTIBAND?

As with the usual questions about effects placement...it depends. Distortion usually goes after the “multiband-compressor-disguised-as-a-crossover” because the whole point is to restrict the range of frequencies going into each stage of distortion. You’ll generally want effects like chorusing to follow the multiband, but as usual there are no rules, so experiment and see what works. For example, distortion before multiband sounds very different because you’re filtering out a fully distorted signal instead of distorting a filtered signal.

If you haven’t tried multiband processing, you’re in for a treat. Hopefully these templates will inspire you to take the concept further.

The 2016.03 fixes and workflow enhancements are available in their own knowledge base article.