MIDI channels, interfaces, inputs, and outputs
Most MIDI instruments can play at least 16 different sounds at the same time—instruments that can play more than one sound at a time are called multi-timbral (pronounced multi-tambral). In order to control which sounds respond to which commands, MIDI messages are marked with a channel number from 1 to 16. That way a MIDI sound module, such as a drum machine, can tell which messages are meant for which of the sounds it is capable of playing. Each instrument has a limit to the number of notes it can play at one time, counting all the notes it is playing on all the sounds it is using combined. That number is usually between 32 and 128, and is called polyphony.
You need some way to get MIDI messages into and out of your computer, so a MIDI system needs a piece of hardware called a MIDI interface, which can be a stand-alone module connected to your computer’s parallel, serial, or USB port; an internal module installed in a slot inside your computer; or can be part of your sound card (the sound cards that come with most computers frequently use the joystick port as an input and output for MIDI data). Your computer sends MIDI messages to your MIDI interface, which then sends them on to your MIDI instruments. That’s how MIDI software plays MIDI instruments. A MIDI interface contains inputs and outputs, labeled MIDI IN and MIDI OUT, which you connect MIDI cables to so you can send MIDI messages to and from MIDI instruments. MIDI instruments can be stand-alone synthesizers or can be built into your sound card. Most inexpensive sound cards have internal synthesizers that can make at least 128 different sounds (if you’re using a synthesizer that’s built into your sound card, you don’t have to connect that to the sound card, since the connections are internal to the sound card).
Figure 26. Joystick connector—use this if your MIDI interface is the joystick port on your sound card. 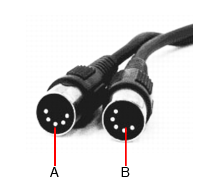