A. CPU meters (one per core) B. Disk Activity indicator C. Disk Space meter D. Memory Usage meter
The Performance module contains the following controls:
CPU metrics
Diagnosing glitches in audio playback is easy with the Engine Load and Late Buffers metrics in the Performance module tooltip. To view these new metrics, hover the mouse over the Performance module. Note: you must have Show Tooltips enabled in Preferences > Customization - Display to see this.
The Engine Load value is a percentage of the total time the engine took to process an audio buffer. If it takes 100% or more of the allotted time, the buffer is processed too late and it will result in audio glitches/distortion. The value in parenthesis represents the max engine load since the time the engine started.
Engine load is a better metric to help troubleshoot audio glitches during playback since it accounts for other delays in synchronizing and processing audio workloads beyond what the CPU meters report. It's normal for engine load to be higher than the average CPU meter value shown.
The Late Buffers count indicates the total number of buffers that took too long to process since the time the engine started. Too many late buffers will result in audible glitches or distortion in playback due to the audio device not receiving buffers in time. 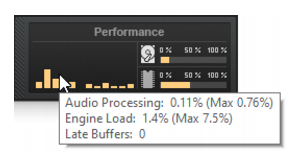