The segment marked “A” represents the string as it is pulled back by the pick; “B” shows it moving back towards its resting point, “C” represents the string moving through the resting point and onward to its outer limit; then “D” has it moving back towards the point of rest. This pattern repeats continuously until the friction of the molecules in the air gradually slows the string to a stop. As the string vibrates, it causes the molecules of air around it to vibrate as well. The vibrations are passed along through the air as sound waves. When the vibrations enter your ear, they make your eardrum vibrate, and you hear a sound. Likewise, if the vibrating air hits a microphone, it causes the microphone to vibrate and send out electrical signals.
In order for us humans to hear the sound, the frequency of the vibration must be at least 20 Hz. The highest frequency sound we can hear is theoretically 20 kHz, but, in reality, it's probably closer to 15 or 17 kHz. Other animals, and microphones, have different hearing ranges.
If the simple back-and-forth motion of the string was the only phenomenon involved in creating a sound, then all stringed instruments would probably sound much the same. We know this is not true, of course; the laws of physics are not quite so simple. In fact, the string vibrates not only at its entire length, but at one-half its length, one-third, one-fourth, one-fifth, and so on. These additional vibrations (overtones) occur at a rate faster than the rate of the original vibration (the fundamental frequency), but are usually weaker in strength. Our ear doesn't hear each frequency of vibration individually, however. If it if did, we would hear a multinote chord every time a single string were played. Rather, all these vibrations are added together to form a complex or composite sound that our ear perceives as a single tone. 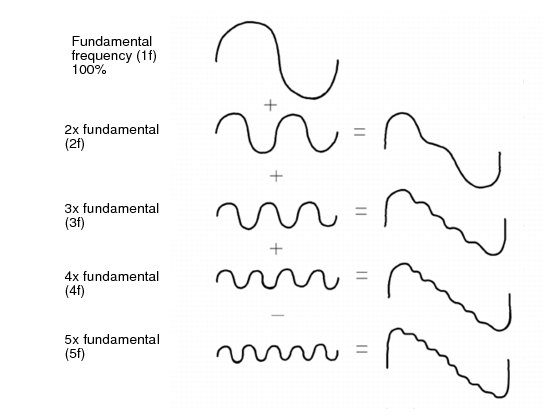 This composite waveform still doesn't account for the uniqueness of the sound of different instruments. For example, stringed instruments usually have a resonator. In the case of the guitar, the resonator is the big block of hollow wood to which the string is attached (the guitar body). This has a major impact on the sound we perceive when a guitar is played because it enhances or amplifies some of the vibrations produced by the string and diminishes or attenuates others. The ultimate effect of all the vibrations occurring simultaneously, being altered by the resonator, adds up to the sound we know as guitar.
See:
Digital audio fundamentals