Waveforms
A sound wave can be represented in many different ways: as a mathematical formula, as a series of numbers, or graphically as a waveform. A waveform displays the size, or amplitude, of the vibration as a function of time. For example, the waveform of the sound of the plucked guitar string might look like this: 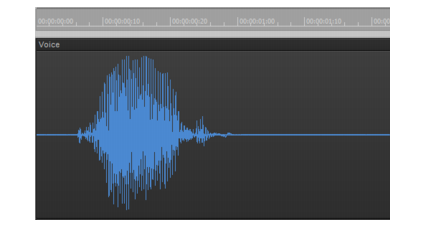 The three waveforms shown above are quite different from one another, both in appearance and sound. Each has its own characteristic shape, or envelope, and each has its own complex combination of frequency components, which can change across the duration of the sound.
The center line of a waveform is the zero line; it corresponds to the rest position (displacement of 0) of the original vibrating object. (A waveform for perfect silence would be a horizontal line at zero.) Back and forth motions of the vibrating object translate to upward (positive) and downward (negative) excursions of waveform amplitude. For example, a close-up of a portion of the guitar waveform might look like this:

The waveform crosses the zero line twice during each complete vibration. These zero-crossings are important in digital audio processing; they are good places to cut waveforms apart and splice them together. If waveforms are cut or spliced at other locations, clicks and pops can occur. The maximum amplitude of the waveform in each vibration is also important: it determines the strength of the vibration, and thus the loudness of the sound.
See:
Digital audio fundamentals