Choosing the instrument sound (bank and patch)
Electronic keyboards and synthesizers often contain hundreds or thousands of different sounds. Each sound is known as a patch. The name comes from the early days of synthesizers, for which you physically rewired (using patch cords) the oscillators and modulators to produce different sounds. Patches are normally organized into groups of 128, called banks. Most instruments have between 1 and 8 banks, but MIDI supports up to 16,384 banks of 128 patches each (that’s over 2 million patches).The Bank and Patch controls in the Console view and Track Inspector control the initial bank and patch of a track during playback. Every time Cakewalk starts playback at the beginning of a project, the bank and patch settings for the track are set to these initial values. Many instruments have descriptive names for their banks and patches. Cakewalk stores these names in an instrument definition. If you are using an instrument that supports General MIDI, your patch list will contain the 128 sounds that are defined by the General MIDI specification.
Note that a single MIDI channel can only play one patch at a time on each instrument assigned to that channel. Therefore, if two or more MIDI tracks are set to the same output and channel but have different bank and patch settings, the patch of the highest-numbered track will be used for all the tracks. In some projects you want the sound played by a track to change while playback is in progress. You can accomplish this using the Insert > Bank/Patch Change command. When you start playback in the middle of a project, Cakewalk searches back through the track to find the correct patch to use—either the initial bank and patch or the most recent bank/patch change. Note that the Console view and Track Inspector only show the initial bank and patch, even while a different bank and patch are being played back. The only way to see and edit a bank/patch change is in the Event List view. For more information, see The Event List view.
To assign an initial bank and patch to a track
On the left side of Cakewalk is the Inspector (see Inspectors), which shows information about the selected track. If the Inspector is not visible, it may be either collapsed or closed. To show the Inspector, click the Views menu at the very top of Cakewalk, and select Inspector. For details, see “To show/hide the Inspector pane”.
Cakewalk can display a hardware synth's banks and patches by name if you have assigned the corresponding instrument definition for your hardware synth. For details, see “To assign instrument definitions to MIDI outputs and channels”. Note that VST soft synths often do not expose this information to Cakewalk.
To search for a patch containing specific text, click the Patch Browser button in the Track Inspector. You can also open the Patch Browser by right-clicking a Bank or Patch control in the Track Inspector or Console view. For details, see To choose patches with the Patch browser.
Figure 118. Track Inspector controls for MIDI tracks and Instrument tracks. 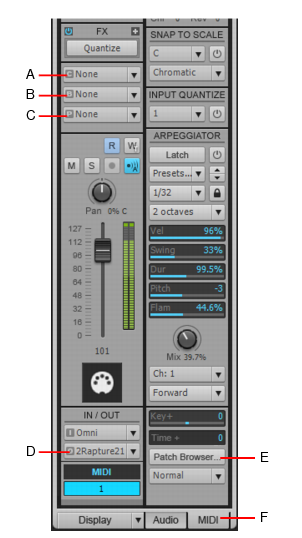 A. Channel B. Bank C. Patch D. Output E. Open Patch Browser F. MIDI tab (Simple Instrument tracks only)
To insert a bank/patch change
Cakewalk inserts a change in bank and patch. When you play back the project, the initial bank and patch shown in the Track view will be used to the point at which the bank/patch change takes place. You can remove a bank/patch change in the Event List view.
To choose patches with the Patch browser
The Patch browser dialog box appears, displaying a list of all the Instrument patch names that have been installed.
Cakewalk changes the patch of the track you selected.
See:
Patch Browser dialog