Reverting clip(s) to original time stamp
All audio and MIDI clips in SONAR have a Original Time property, which stores the original SMPTE time stamp associated with a clip. The Original Time clip property is based on absolute time, not tempo. This allows you to freely re-arrange clips and later revert them back to their original time.
SONAR automatically assigns the Original Time property during import or immediately after record. When an audio clip containing a SMPTE time stamp is imported into SONAR (such as a Broadcast Wave file), the Original Time field is populated with this time stamp. When opening previous SONAR projects, existing clips will be populated with their current time.
Figure 133. The Clip Inspector. 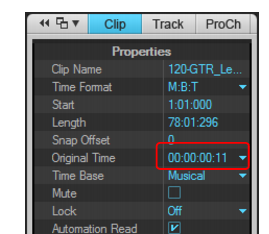