Dimension Pro's wide tonal range can be attributed to both advanced sample mapping and a powerful sound-sculpting engine with analog sound generation that lets you mutate and recompose any sound you might imagine. 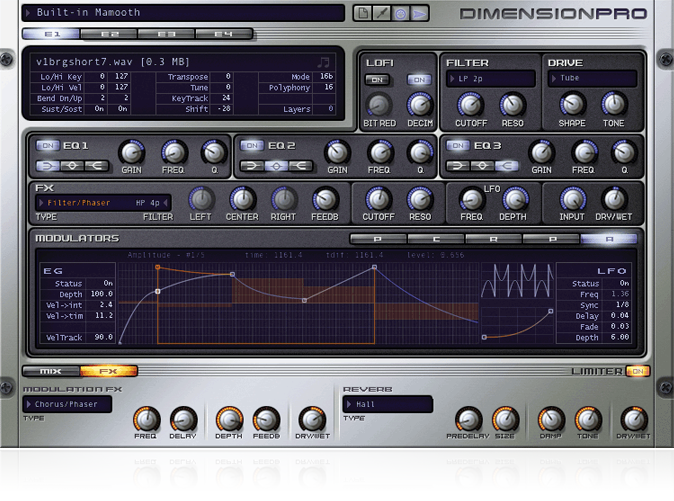 The unrivaled, non-aliasing Dimension Pro engine is at the heart of their unparalleled sound quality and capabilities for creative expression. Dimension Pro's engine provides rich resampling and synthesis, while simultaneously giving access to extended performance characteristics of sound programs.

Dimension Pro's engine is a multifunctional engine, providing capabilities for several types of synthesis under one hood, including multisample rendering, wavetable synthesis, REX playback and manipulation, waveguide synthesis, and an extensive DSP library of effects.

Dimension Pro's wavetable synthesis provides a resampling technique, which comes even closer to anti-aliasing perfection than multisample rendering. Wavetable synthesis utilizes a single, inaudible, one-cycle waveform, and through analysis and resampling, synthesizes this sound across the entire MIDI key-range. This process is similar in some respects to the propagation of simple waveforms found in analog modes of synthesis.