The latest generation of E-MU's audio interfaces utilize PatchMix DSP - a virtual console that allows you to route the physical inputs and outputs to any one of the available ASIO/WAVE drivers as well as control volume and panning, create aux sends and effects processing completely independent of SONAR.

While this flexibility is really powerful, it does require knowledge of PatchMix DSP's routing scheme in relation to SONAR in order to take full advantage of it. In this guide we're going to cover the basics of getting input and output to and from SONAR using PatchMix DSP. In the example we are using an E-MU PCI interface with an 1820m breakout box. You're routing and available inputs and outputs may be different depending on the model of E-MU card you are using. For this example we are using the ASIO driver mode in SONAR. Detailed steps on configuring SONAR to work with your E-MU card can be found here:

To start you'll want to close any programs you have open including SONAR and open PatchMix DSP.

Note: E-Mu provides many templates that can do these set-up steps for you if you would prefer not to set one up manually.

Locate and click the 'New Session' button in PatchMix so we can start from a blank page.

For this exercise we're starting with the 'Product Default' template. But you can choose any of the available ones. Use the tabs across the top to select a sample rate. We're using 44.1 kHz, but if you plan to do all of your recordings at a higher sample rate you will want to choose it now.

Finally we want to remove any Aux sends that may have been set-up in this session. Locate the 'Aux Effects' pane. This is directly above the Main Mix volume slider in the lower right pane of the interface. To instantly wipe out all of the sends, right-click in one of the four boxes where it reads 'SEND' and choose "Delete All Inserts." 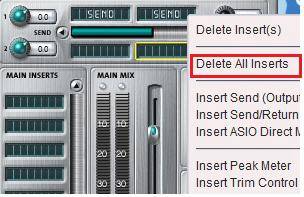 Setting up your inputs for SONAR.

Now that we have an empty slate to work with we need to set it up for SONAR. To get input and output to and from SONAR you'll need four things in PatchMix DSP:

1) A physical input strip for the input source.

2) A send from this strip to an ASIO input so that SONAR can record it.

3) An ASIO output strip for SONAR to output it's audio through.

4) An output assigned to any physical output.

The first thing we need to do is create the input strips. This is how audio will get to SONAR from your E-MU interface's physical inputs. To create a new strip, click the Create Strip button in the upper left corner of PatchMix. 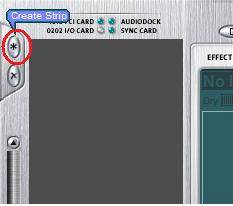 This will bring you to the 'New Mixer Strip' dialog. Check the box for 'PhysicalSource' and choose one of the stereo input pairs. In this example we are using the Mic Inputs A and B on the front of the 1820m dock. You can choose any input you'd like to use. But to simplify things in SONAR  it's best to only choose stereo inputs.

This will create a new mixer strip in your PatchMix DSP window labeled 'Stereo 1'. If you'd like to give it your own name you can do so using the box on the bottom of the strip outlined in green in the picture below. To help simplify things and make sure we are getting a signal we're also going to put a meter on this strip to monitor its input.To do this right-click on the first blank box labeled insert and choose, "Insert Peak Meter" outlined in red in the diagram on the right. This meter will indicate when signal is coming into the strip from the physical input we selected when creating the strip. Again, in this example we are using the Mic inputs on the front of the 1820m. We now have input coming into Patchmix DSP. But we need to get it into SONAR. To do this we have to create another insert, in PatchMix DSP language, a "Send" is what will send audio from your PatchMix mixer to SONAR.

Right-click on the box below your new Peak Meter and choose "Insert Send (Output to ASIO/WAVE or Physical Out)" outlined in blue in the diagram to the above. This will bring you to the New Send Insert dialog. We have chose to use "HOST ASIO IN 1/2" but PatchMix will allow you to route the signal to any one of the 32 ASIO channels or physical outputs of your hardware. 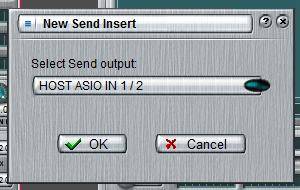 Let's recap what we have done up to this point:

1) Created a mixer strip whose input is a physical input on our E-MU hardware
2) Created a Peak Meter so we can monitor the signal coming into this strip.
3) Created an output on the strip to the E-MU ASIO driver so the signal can be recorded in SONAR. To create more inputs into SONAR you will want to repeat the above process for however many inputs you plan to use on your hardware. In this example we were only using the analog and mic inputs on the 1820m. So we only created 4 stereo inputs routed as follows:

This configuration will allow us to record 4 stereo or 8 mono tracks into SONAR. 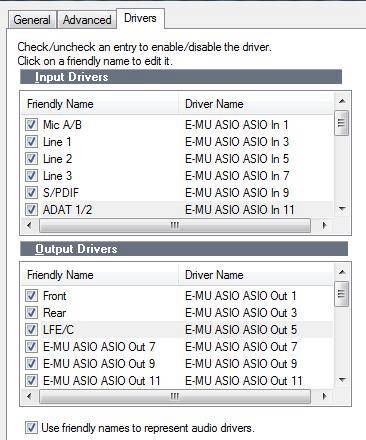 Because PatchMix allow for such flexible routing you may find it helpful to use Friendly Names to make it easier to identify which input you are recording in SONAR. To do this click Options | Audio | Drivers. Under thecolumn labeled 'Friendly Name' double-click on a driver to rename it. We name ours to correspond with the routing in PatchMix. Thus, ASIO In 1 will be displayed as "Mic A/B" when you go to choose an input.

You can also do the same for your outputs.

Before clicking the [OK] button be sure you place a check in the bottom of the window for "Use friendly names to represent audio drivers."

Setting up outputs for SONAR

At this point, SONAR should be receiving input. But we need to be able to playback audio from SONAR also and route it to the hardware outputs on our E-MU hardware.

This involves creating at least one more mixer strip. However instead of a Physical Source this time around we will want to choose a Host Source. Start with "ASIO OUT 1/2" to keep things simple.

Again we have chosen to insert a Peak Meter on the new strip. This will make it possible to monitor SONAR's output into the PatchMix mixer. The next part is where routing can get a little more tricky so we are going to split it into different scenarios.

Scenario 1: "I just need a stereo output to hear a SONAR mix."

To accomplish this is rather straight forward. You should have at least one mixer strip in PatchMix now whose input is "ASIO OUT 1/2". Click the Outputs button (outlined in red below) in the upper right corner of PatchMix and then click on the yellow physical button. In the setup displayed in the image below we had powered speakers hooked up to output 4 on the 1820m and we also wanted the option to use headphones. To make this happen check the green "MON" box for the output your speakers are hooked up to as well as the Headphone jack.

Hearing playback from SONAR it is simply a matter of setting your track or bus outputs to "EMU ASIO OUT 1" and you will hear your audio play through your interface. You can use the Monitor knob in PatchMix to control output volume to your speakers as well the headphone control knob if your interface sports one to control the headphone's volume.

Scenario 2: "I need to have multiple hardware outputs so that I can mix in surround or another multi-channel format."

This is a bit more complex than the previous scenario. First we need to create enough mixer strips to accommodate the required outputs. In this example we are doing a 5.1 surround mix. This will require three stereo pairs or mixer strips. It might help to give these labels also like Front, Rear and LFE/C to indicate which mixer strip corresponds to the front, rear, LFE (sub) and Center outputs. (See green outline in the picture above.)

Again, we chose to place peak meters on each strip so we could monitor SONAR's output. The next step is Inserting a send on each strip. Each send needs to be assigned to a different physical output. We're using outputs 1,2 and 3.

The last step is double checking your output assignments. The best way to maintain discrete outputs would be to uncheck all of the 'MON' boxes so your physical output assignments look similar to ours in the diagram below. 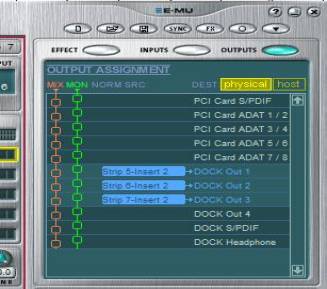 This will get you started with the basics of using PatchMix DSP with SONAR. There are many more powerful things you can do with PatchMix that you can learn about by reading through the PatchMix help files. You can get there by clicking on the little question mark button in the upper right corner of the PatchMix interface.

Don't Forget to save your PatchMix DSP settings as a session. You can call a session up again by clicking on the little disk button in the upper right corner of the interface.