This article was adapted from the SONAR Jamaica Plain Update PDF.

To download the Jamaica Plain core update itself, download from the core SONAR Artist, Professional, or Platinum category.

Professional and Platinum users should update the Engineering Suite (the LED will be yellow) to update Channel Tools.

Platinum users should also update the Boutique Suite (the LED will be yellow) to update the VX-64 and PX-64.

Cakewalk has been quietly developing a Universal Routing Technology that gives tremendous flexibility when routing signals within SONAR. One of the first examples was the FX Chain, which provided a “container” for routing effect inputs and outputs together, and had the intelligence to disconnect controls if the effects being controlled were removed. The ProChannel and FX Racks are a basic example of taking the “insert jacks” on mixers to a more flexible level by providing two ways of inserting effects, where one block could be pre or post compared to the other.

Synth recording took the concept another step further by allowing real-time recording of synth outputs, but now Patch Points and Aux Tracks introduce a mind-boggling level of flexibility: you can feed tracks (audio or instrument) into tracks, buses into tracks, sends into tracks, or even (get ready!) tracks, sends, and buses into the same track—and much more. It’s even possible to do something like feed track outputs and bus outputs into an Aux Track, when can then feed with other Aux Tracks and a Send into a different track. This may sound complicated enough to make your head explode, but it’s all implemented in a smart, intuitive way that not only adds no clutter to the Track or Console view, but even cleans up unused patch points if the routing changes.

Please note: Projects that contain Patch Points and Aux Tracks cannot be opened in SONAR versions prior to SONAR Jamaica Plain (Update 9). If you need to open a project in an earlier version, first back up the project, unassign any patch points, then re-save the project.

Here’s a graphical representation of how a Patch Point connection might work.

To rename a Patch Point, follow the input picker’s Patch Point’s selection menu and choose Rename patch point. The Patch Point does not need to be the selected patch point in order to be renamed. Patch Points cannot be renamed from the output picker. 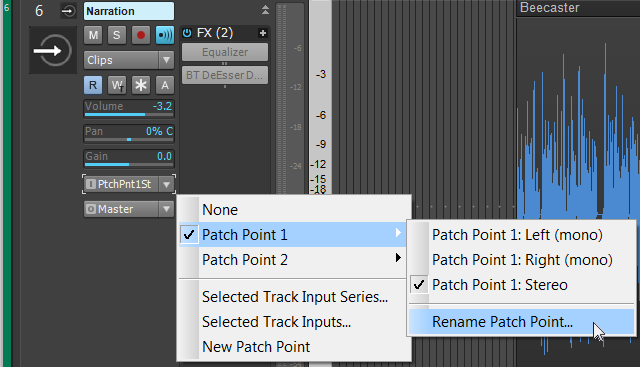 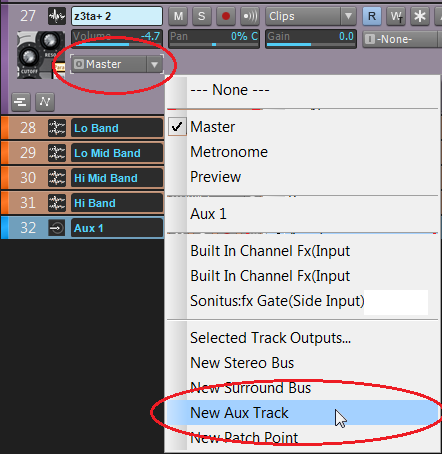 The Aux Track now appears like a Patch Point in output menus. 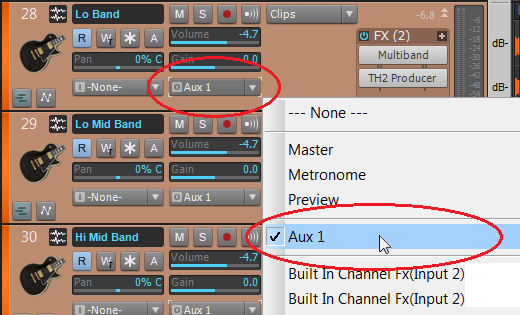 Here are some representative applications for using Patch Points and Aux Tracks. There are often several ways to accomplish the same functionality, so use whichever is most comfortable. For example, if you already have existing tracks that you want to connect to Patch Points, it’s probably easier to assign their inputs to Patch Points than create new Aux Tracks. However, if you’re setting up a new recording scenario, it will probably be easiest to create an Aux Track as that will create both a track and a Patch Point assignment.

Application #1: Recording the Metronome to a Track

Note: If your project already contains a Metronome bus, skip to step 7.

There are many possible applications; here’s a typical use involving multiband distortion.

A guitar feeds four tracks, each with a Sonitus:fx Multiband compressor. Each Multiband compressor has a different band soloed to divide the guitar into four frequency bands, with each band distorted via the TH2 amp sim (the reason for distorting each band individually is lower intermodulation distortion and a “cleaner” distortion sound). The outputs then terminate in an Aux Track, which mixes all four tracks without having to set up sends. Furthermore, all the tracks can be processed simultaneously using the Aux Track’s FX Rack, and placed within a Track Folder to tidy up the Track View layout.

Parallel processing usually involves either copying a track or using a bus. The Aux Track and Patch Point functionality simplifies this process, and allows inclusion within a Track folder. 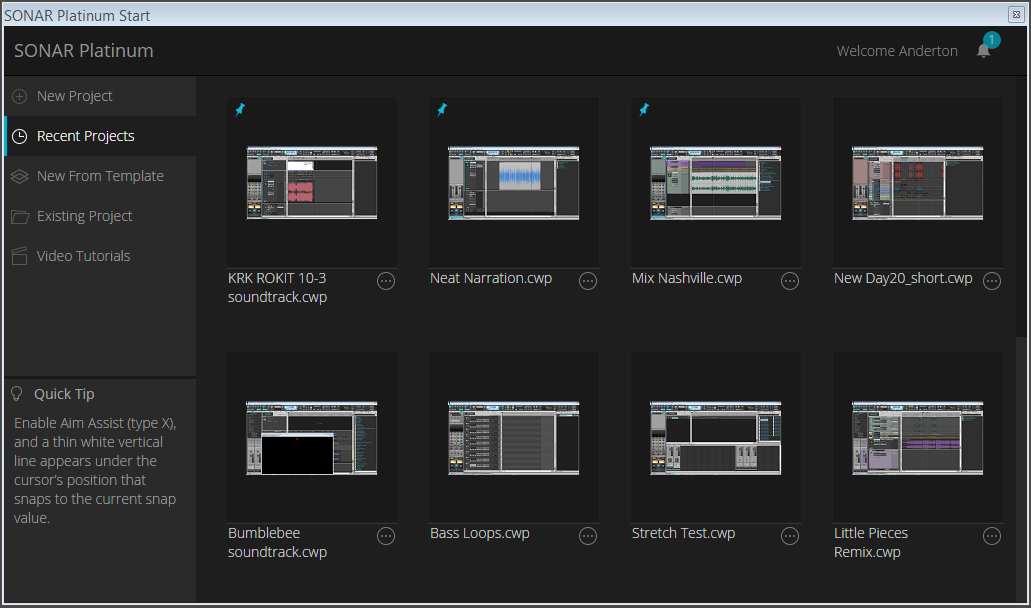 The Start Screen has some major improvements that will get you off to a better…start.

Some plug-ins and virtual instruments sound better when recording at sample rates higher than 44.1/48 kHz because high audio frequencies can interfere with lower clock frequencies, which causes foldover distortion. This adds a “wooliness” at lower frequencies, and can also compromise high-frequency response. Plug-ins that include internal oversampling do not have this problem, but not all plug-ins—particularly older ones—use oversampling.

The Foxboro update introduced Upsample on Render, which provides the benefits of using higher sample rate processing even in 44.1 kHz or 48 kHz projects by internally 2X up-sampling plug-ins of your choice, rendering them as audio, then down-sampling the rendered audio back down to the original sample rate. While it may seem counter-intuitive that the audio quality from rendering at 96 kHz is preserved at lower sample rates, the lower sample rates have no problem reproducing signals in the audio range, and by rendering at 96 kHz, the problematic frequencies no longer exist.

The Jamaica Plain update now offers Upsample on Playback, so you can preview and compare the difference in real time. To enable either Upsampling on Render or Upsampling on Playback on a per-plug-in basis, click the FX button to the left of the instrument name in the virtual instrument interface. 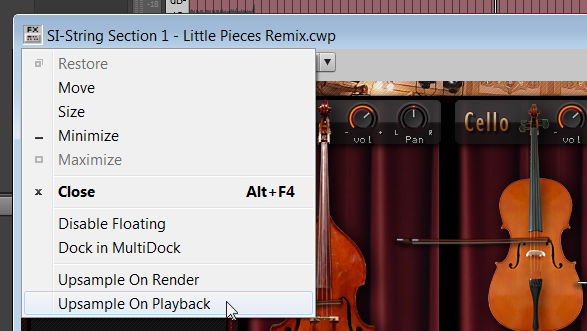 To turn upsampling on or off globally for plug-ins that have upsampling enabled, use the 2X button in the Control Bar’s Mix module.

In addition to implementing new features, we continue to probe existing elements within SONAR for potential improvements. The Jamaica Plain update is the culmination of work that’s been going on “behind the scenes” to make the latest version of SONAR the fastest and smoothest yet.

SONAR detects silence on VST2 and VST3 synth outputs, and dynamically activates the output for input monitoring/mixing/recording only when a synth output is not silent. For projects or templates containing hundreds of synth tracks, the CPU savings can be significant. (Note that although VST3 supports turning off plug-ins when silent, hardly any instruments implement this. Fortunately, SONAR’s built-in output CPU saver provides the same results.) 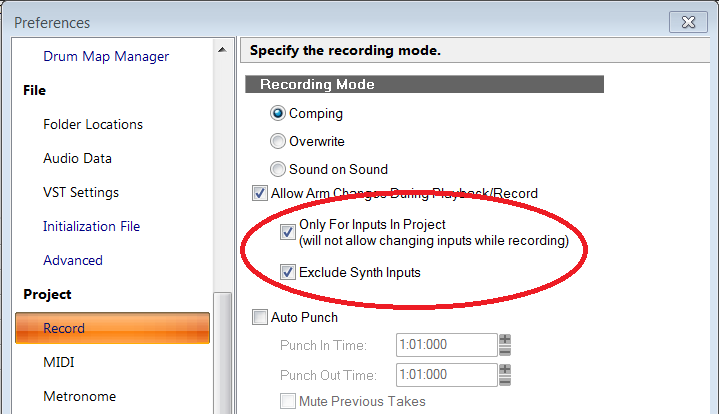 In Preferences > Project > Record, checking the boxes under “Allow Arm Changes” (they default to checked) improves transport performance on start and stop with large projects containing hundreds of synth tracks. When checked, you can arm tracks only when the transport is stopped. This avoids record pre-roll overhead caused by needing to pre-create record files for synth inputs.

The Jamaica Plain fixes and workflow enhancements are available in their own knowledge base article.