This article was adapted from the SONAR Kingston Update PDF.

To download the Kingston core update itself, download from the core SONAR Artist, Professional, or Platinum category.

Rapture Session is a separate download. Please download it as well as the various sound packages located under Rapture Session (Atmospheric, Guitars, Keys, Orchestral, and Synths).

Several core areas of the program have been streamlined that resolve various longstanding issues. Power users in particular will find working with SONAR faster and more efficient, however these improvements make a difference even with simpler projects.

Dynamic arming of tracks is now much more efficient when a project contains multiple instances of multi-output synths (like Native Instruments’ Kontakt)—CPU loading from having even thousands of synth outputs present is minimal. In the Jamaica Plain update we added the "Exclude Synth Inputs" flag in record options to filter synths from dynamic arming, but depending on your system, with the Kingston update it may not be necessary to exclude them anymore.

SONAR now detects silent buffers for VST2 and VST3 plug-ins as well as instruments. This has the benefit of reducing the CPU load for tracks that contain VST plug-ins when the tracks have no audio or are silent due to muted data, since the mixer optimizes itself for silent streams. For large projects, the amount of CPU power this saves usually allows for lower latency settings.

Furthermore, there is now improved multiprocessor thread synchronization for soft synths. This also helps reduce demands on the CPU.

Additionally, registry access to the VST cache (which was a CPU-intensive task) is now minimal. This provides a dramatic increase in speed for many operations like cloning tracks, inserting tracks, file loading, and various other commands. Registry access has also been reduced when starting SONAR, again speeding up load time.

Cloning and insertion of multiple tracks, and insertion of virtual instruments with multiple outputs, is now much faster. UI updating time has been minimized for multitrack edit operations such as insert, delete, clone, etc. by showing a progress bar while updating all tracks instead of updating tracks incrementally. What’s more, redundant UI update messages are now sent only once at the end of all insert operations, which speeds up operation. You’ll also find improved support for dynamically enabling input monitoring from Track View and Console View.

Along with various VST compatibility improvements, SONAR officially supports VST 3.6.5 and the Channel Context Info Interface, as well as VST3 support for mono-capable plug-ins (such as those from EIOSIS and FabFilter). These will now switch to mono automatically upon selecting Mono with their respective track interleave buttons.

To put this all in perspective, here are some comparative editing benchmarks between SONAR X3 and the latest Kingston release. Benchmarks were performed on a Haswell Core I7 5960X with 16 GB RAM running 64-bit Windows 8.1.

Rapture Session ($29.95 for new users, free to members) is a “greatest hits” version of Rapture Pro, with a 4 GB library consisting of 450 hand-picked sounds—all easily accessible from the Rapture Session browser. Although it doesn’t include Rapture Pro’s advanced editing and mixing, it offers the live performance controls that make Rapture Session equally at home on stage as in the Studio.

You asked for it, and here it is: A list view for the Start Screen so you can see more projects at once. However, note that you can still expand individual projects in List View if you want to see the project details.

To choose List View, click on the button to the right of the standard Icon View button just below the notifications bell symbol. 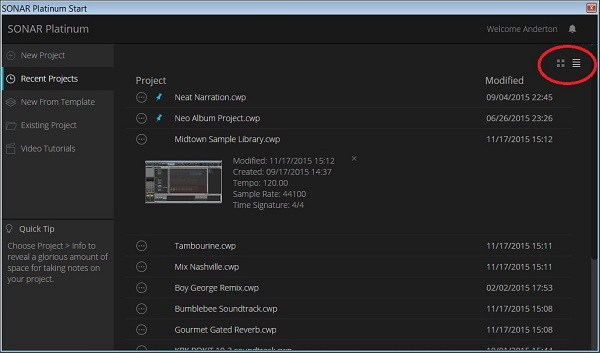 With so many people using headphones for mixing because that’s ultimately how the music will be heard (as well as to avoid angry neighbors!), it helps to do a quick “reality check” on what music will sound like when played over speakers.

The Monitorizer FX Chain, part of the Anderton Collection and located in the Processors folder, is a send effect that helps eliminate the "super-wide" stereo sound of headphones to approximate an experience that's more like listening on monitors. Furthermore, some people simply like the stereo imaging better with the Monitorizer engaged when listening on headphones, as it can also introduce subtle room damping and room reflections, and you can adjust the effect amount.

While not as sophisticated as some products that try to emulate a complete room environment down to the last detail, the Monitorizer is based on the same principles:

Using the Monitorizer in SONAR

This is a send effect, and is suitable for use with SONAR’s new Aux Track feature.

Head Delay: Sets the delay of a speaker to reach the opposite ear. Settings between 70% and 80% are typical (unless you have a really, really big head).
Room: Turn up to add some subtle room reflections.
Dampen: Turn up to emulate the high-frequency loss in the signals arriving in your ears from the opposite speakers.
Amount: Turn up to increase the Monitorizer effect
A/B: Enables the Monitorizer when lit, and allows for easy comparisons without having to adjust knobs.

Paradoxically, sometimes it sounds like the stereo imaging is actually wider with the Monitorizer, especially with high Room and Head Delay settings. However, it’s often just a more satisfying stereo image because it doesn’t sound as exaggerated.

The Kingston fixes and workflow enhancements are available in their own knowledge base article.