This article was adapted from the SONAR 2016.04 Update PDF.

The SONAR 2016.04 update includes the following:

To download the SONAR 2016.04 core update itself, download from the core SONAR Artist, Professional, or Platinum category.

Professional: Update the Boutique Suite (its LED will be yellow) to install TH3 Cakewalk Edition.

Platinum: Update the Engineering Suite and Boutique Suite (their LEDs will be yellow) to install the new mastering plug-ins and TH3 Cakewalk Edition. 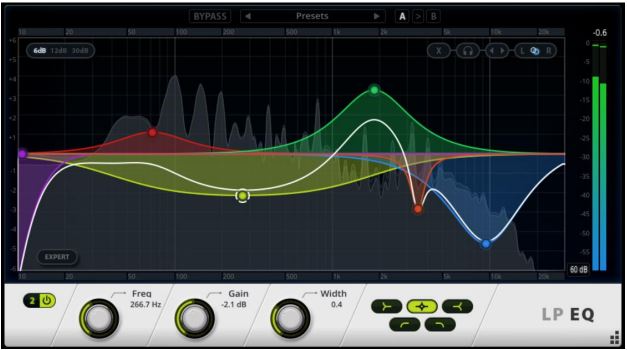 The LP EQ is a redesigned VST3 replacement plug-in for the LP-64 EQ linear-phase EQ. Unlike traditional analog EQs that alter phase, linear-phase EQs maintain phase coherancy. Known for their transparency and freedom from amplitude changes caused by phase shifts, linear-phase EQs are often the EQ of choice for mastering and other precision applications where a neutral, unobtrusive sound is important. Furthermore, the LP EQ even offers a non-linear mode for a different type of sound that doesn’t require as much CPU power.

The LP EQ provides an ideal complement for the ProChannel’s QuadCurve, whose ability to impart “character” is often desirable. Between the two, you can find the type of EQ that works best for any given material.

However the LP EQ is more than “just another EQ,” as it offers spectrum analysis (both pre- and post-EQ), as well as multiple convenience features.

The LP EQ can do conventional stereo processing, and even apply separate processing to the left and right channels. However, it’s also a mid-side processor. Although the term “mid-side” is often applied to a particular recording technique, it’s also used for signal processing.

For those unfamiliar with mid-side processing, a technique called mid-side encoding uses phase and panning to split a conventional stereo file so that the center of the stereo spread (the material that both channels have in common) goes into the left (“mid”) channel, while what the channels don’t have in common goes into the right (“side”) channel. This means that you can process the center separately from the left and right “sides” of a stereo signal. For example, because the kick and bass are often placed in the center of the stereo spread, you can process the mid channel to affect these sounds without affecting percussion that may be panned to the left and right sides. Another common mid-side processing technique is adding a bit of a highfrequency boost to the “side” channel so the left and right sides of the stereo field have a brightness that tends to widen the stereo image.

After this processing, decoding the mid-side signal converts it back into a standard stereo file. However, what’s totally cool about the LP EQ is that all the encoding and decoding happens
transparently, under the hood. When you do mid-side processing with the LP-eq, encoding and decoding happens automatically on the fly, so while you’re tweaking the parameters, you hear the results as a standard stereo audio file. 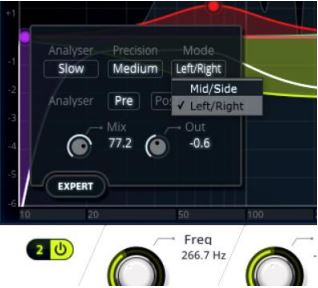 The Expert panel offers some of the LP EQ’s most powerful features. When you’re looking for subtlety, the dry/wet mix control lets you blend the dry and EQed sound for parallel processing—it’s easy to alter the effect of the EQ on the overall sound. The Expert panel is also where you can set the precision to reduce CPU power if needed, as well as choose whether you want the EQ to operate as a traditional stereo EQ with the option for independent processing of the left and right channels, or do mid-side processing.

There’s a spectrum analyzer that’s similar to the one in the QuadCurve, but has multiple adjustments in the Expert panel: see the spectrum at the input, the output, or both, as well as choose the response speed.

The way the LP EQ allows for changing Gain is also helpful. Suppose you select multiple EQ nodes, with two that are boosting at 6 dB, and another one that’s cutting at 4 dB. If you click on one of the nodes that’s boosting by 6 dB and bring it down to 3 dB of boost (half as much), then the node that’s cutting will now cut by 2 dB—half as much. This makes it really easy to reduce or increase the overall effect that EQ has on a signal (it’s also a good way to follow the advice about “the rule of half”).

There’s a saying that “comparisons are odious,” but that’s not the case with signal processing—so the LP EQ has a comparison function that lets you switch between two different curves. This is in addition to the bypass option, so you can actually compare among no EQ, two different EQ curves, and with the wet/dry mix control, various amounts of EQ. Of course, you can also name, save, and delete presets via the plug-in’s preset management in the header.

The LP EQ has many other useful features (like the outstanding Solo mode); these are only the highlights. For the complete story, click on the UI to give it focus, and type F1 to bring up the online help. 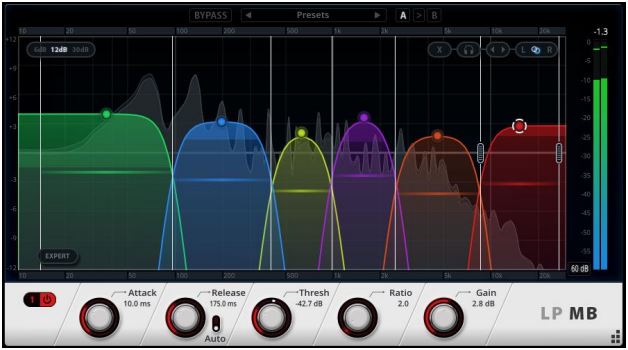 Similarly to the LP EQ, the LP MB has been re-designed from the ground up as a VST3 replacement plug-in for the LP-64 Multiband. It has much in common with the LP EQ, including linear-phase operation (which can be switched to non-linear to conserve on CPU power), the ability to process the left and right channels independently, mid-side processing, and spectrum analysis.

Because the filters are linear-phase, even after splitting up the audio spectrum into different bands, re-combining them maintains phase integrity. This eliminates comb filtering, “phasey” smearing, transient degradation, and unintended coloration. What’s more, being able to apply dynamics processing to the center and/or sides of the stereo field via mid-side processing techniques is extremely powerful. For general information about mid-side processing, please refer to the section in the LP EQ description titled “Mid-Side, Too.”

Although most people tend to think of multiband compression in terms of dynamics control, the ability to create separate bands and change their levels means that the LP MB also offers powerful equalization features. In fact, you can think of the LP MB as a supremely flexible graphic equalizer that just happens to have dynamics processing, or as a dynamics processor that allows for highly frequency-selective operation.

There are six available bands, which can be linked so that (for example) adjusting one band’s upper frequency simulaneously adjusts the adjacent band’s lower frequency. They can also be unlinked, which allows specifying narrow, independent bands as a range for dynamics control. 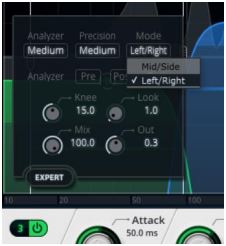 AND, IT’S A CROSSOVER

The SONAR 2016.03 update included Track Templates for multiband processing that are based around using the Sonitus Multiband as a crossover. However, Platinum members can take advantage of the LP MB’s superior fidelity and phase linearity when used as a crossover thanks to the ability to solo individual bands. For more information on multiband processing, see the article “Multiband Processing Track Templates” starting on page 11 of the SONAR 2016.03 eZine.

The remaining features again follow the LP EQ closely: A/B comparison, Solo mode for highlighting a specific frequency range, and the like. Also like the LP EQ, you can click on the UI to give it focus, and type F1 to invoke the online help to find out more about this outstanding plug-in.

TH3 Cakewalk Edition, the long-anticipated update to TH2, is a VST3 effect that features an updated UI, new components, and more detailed modeling accuracy. Furthermore, it works with Cakewalk’s exclusive VST Persist Compatibility for VST3 plug-ins (please refer to the article on page 12 for more details). 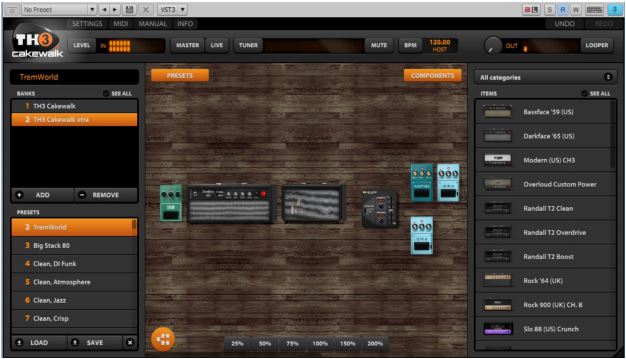 One of the main differences compared to TH3 is the 4th generation analog emulation technology, which improves the realism and “feel” compared to TH2. Overloud has also introduced ReSPiRe 2 Technology, which (aside from indicating Overloud may be having intermittent issues with their caps lock key) provides cabinet emulations with more realism and “feel.”

Furthermore, there’s full compatibility with TH2 user presets, so you can bring presets you’ve already created in TH2 and dress them up with TH3’s improved sound quality and emulations. However, TH3 will also faithfully reproduce any presets based on TH2—even effects chains. So if you’ve created an FX Chain that uses TH2, it will sound exactly the same even if it’s using TH3. Also note that installing TH3 doesn’t overwrite any version of TH2 you have installed; it will still be available if you want to use it. 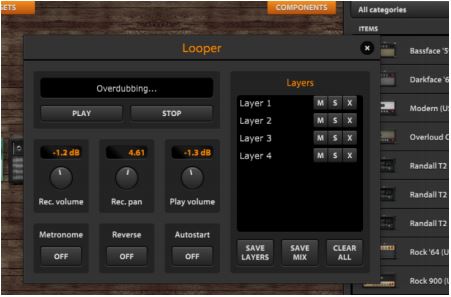 Not only has the UI been enhanced, with the ability to “zoom out” and see all of the effects in your setup at once, but there’s a more generous assortment of components than with TH2 Producer: 14 amps, 10 cabinets, 13 effects, and a volume pedal. Also, many musicians—not just guitarists—will appreciate TH3’s new looper, which lets you build up layers of sound by looping parts and doing overdubs.

The basic operation remains the same as TH2, as does the ability to do parallel processing, so you won’t have to scale any radical learning curves. The main differences are more options, an updated UI, and superior sonic quality, as well as far more capabilities for those using SONAR Artist. So grab your axe, and take advantage of what makes TH3 Cakewalk Edition a step up from TH2 SONAR and TH2 Producer.

With any DAW, if you have the latest version of a plug-in, don't have a compatible older version of the plug-in installed, and try to open a project that uses the older plug-in, you’ll get some kind of "missing plug-in" error message. End of story. 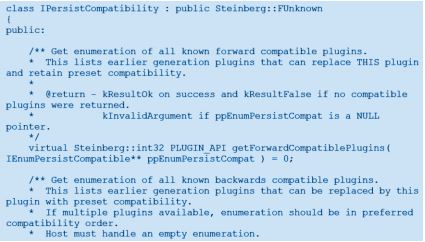 However, it doesn’t have to be that way anymore. Cakewalk has come up with an ingenious extension to the VST3 spec called “VST Persist Compatibility” (VPC). As a long as a newer plug-in indicates compatibility with an older plug-in (VST2 or VST3), when loading a project SONAR will automatically swap in the latest plug-in and adopt the parameters of the older plug-in—even if it’s not installed.

As a practical example, there have been several different versions of TH2 for different SONAR versions. The TH2 parameters are a subset of TH3 Cakewalk Edition so with VPC, even if no version of TH2 is installed, TH3 will tell SONAR it’s compatible with TH2 and load the TH2 parameters stored in the older project. Furthermore, via the VPC interface, the host may additionally attempt to remap any automation for the old plugin to the new plug-in. This saves laborious reassignment of envelopes in the DAW. Also with VPC, newer VST3 plug-ins can also be backward compatibility with older VST3 versions of the same plug-in.

The magic that makes this happen is in a header that the plugin vendor needs to implement (and of course, the host needs to support it). So far only TH3 has been “retrofitted” for this kind of backward compatibility, but the same technique can be applied to other plug-ins. It can even be added as an update to plug-ins that have already been shipped, and new, backwardcompatible versions can be added at any time to future updates.

While not part of the official VST3 specification, Cakewalk has offered it to the industry as a possible extension. Meanwhile, the best part about this feature is you won’t even know it exists if it’s needed—all you’ll know is that your project loaded without the error messages you might otherwise find.

The LP-64 EQ and LP-64 Multiband legacy linear phase plug-ins are no longer included in the Engineering Suite, because the new versions are so much more advanced. However if you have older projects that use the older plug-ins and install SONAR on a new computer, you’ll probably want them installed for backward compatibility. There are two easy ways to obtain the older builds.

The 2016.04 fixes and workflow enhancements are available in their own knowledge base article.